Data Center uses Encore to monitor Demand Response Performance
A 1.2M square ft Data Center located in Northern New Jersey was participating in a Demand Response program utilizing their backup generators as the primary means of reducing their 7MW of load. The service provider that they worked with installed telemetry metering from the utilities KYZ pulse output to report the performance to the grid operator. However, the facility director wanted live access to the generators output so that they could measure the performance of the generators and watch loading on each of the four 2.5MW turbines in real-time and historically. And, it had to painlessly integrate into his existing BMS system over an IP backbone.

Backup generators are critical to the operation of a 24×7 facility, downtime is lost revenue and lost customers. A facility operator needs to know what’s happening to his system all the time, and electricity is the main backbone of his entire operation. Let’s face it, no matter how many T1’s are coming in from different carriers and different POP’s, if the electricity goes out everything stops working including communications.

Utilizing the Encore Series ES230 DataNode’s along with their existing Encore Series Software installation, the Facility Director was able to give his BMS team a Modbus map for the instruments which were easily programmed. Because these were backup generators installation was much easier, however they were done sequentially in bypass mode because no one knows if or when the power will go out and the engines would be needed for an emergency. After the installation was complete and the integration into the BMS was done, the facility manager performed a live test and the results were perfect. The facilities network operations center (NOC) was able to read the instantaneous values from the generators from their control room, the ES230’s were also integrated into the existing Encore Series Software system so the facilities engineers also gained that they were able to see all of the instruments remotely when needed.

The graphs below display how easy it is for a user to view their reports on energy usage, demand, and any other electrical parameters recorded in the Encore Series Software from any remote location. 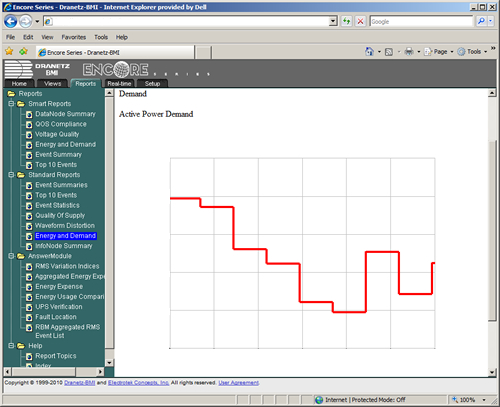 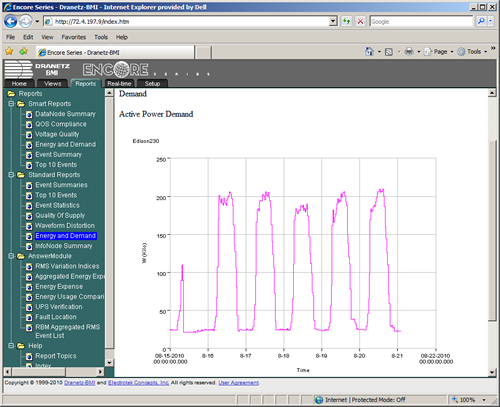 The ES230 DataNode’s are small and easy to install and configurable either at the local display or through the Encore Series Software. These instruments are capable of recording Volts, Amps, kW, kWh, kVA, kVAR, Power Factor, Harmonics, and a variety of other parameters simultaneously. They also have the option of RS232, RS485, or Ethernet communications and support native Modbus protocols. The Encore Series Software is a web enabled application that does not require the installation of any software on a local users computer. The system can be accessed from any web-enabled browser by multiple people simultaneously, and performs a variety of operations, including; data collection, data analysis, reporting, alarming, and remote setup of the equipment. With the Modbus driver installed the software can easily read data from any previously installed instrument that supports the Modbus protocol. Additionally, the software allows for easy expansion, including the addition of Power Quality instruments for more detailed analysis of power anomalies.