Most high reliability facilities have a significant investment in UPS systems, generators and other mitigation devices in order to prevent electrical supply problems from impacting their business. However, these mitigation devices and related equipment are complex electro-mechanical systems that are themselves susceptible to failure and often do not provide any alarms or notifications when not functioning up to manufacturers specifications. That’s where continuous power monitoring comes in.

“Encore Series paid for itself today”

Power Quality monitoring systems continually evaluate the health of the electrical supply at key locations within a facility including the utility supply, generators, UPS input and outputs and other critical distribution points and load. These systems have been proven to prevent problems from occurring by proactively detecting anomalies in the electrical supply before they escalate into system failures. These systems are invaluable for troubleshooting failures should they occur as well as monitoring demand, energy and environmental parameters like temperature and humidity.

The ideal time to install any electrical equipment, including power monitoring equipment, is during the initial construction phase. An often overlooked benefit of these monitoring systems is they can be an extremely valuable asset that can be used during site commissioning. During this phase the entire facility is put through its paces with each element being thoroughly tested to validate the design, see if equipment is operating to manufactures/designers specifications and that it is compatible with the overall facility. Power monitoring systems can provide significant added value not only by recording and documenting the successful commissioning of a facility but also in identifying and resolving any system failures that occur at this critical phase.

A large worldwide cable television and media company recently constructed and commissioned a state-of-the art data center and production facility. During construction, Dranetz’s Encore Series System, a permanently installed power quality monitoring system was installed to monitor 25 key locations within the data center. Monitored locations include each utility feed, generators, inputs and outputs of each UPS and critical PDU’s downstream from the UPS. Encore Series was chosen for many reasons including state-of-the-art power quality capabilities, ease of use, web browser interface and cost vs. the competition.

Wanting to take full advantage of its benefits, Encore Series was an integral part of site commissioning with recorded data continually being evaluated and compared to expected results. Among many items, the commissioning procedures included tests to evaluate the source transfer from utility (one of two utility supplies) to generators then back to utility. Unlike other test performed, this transfer test failed multiple times with the facility remaining dark and the test uncompleted as failures were detected prior to completion. Between tests one line diagrams were reviewed and compared to the actual build out in order to verify proper equipment installation and construction in attempts to locate the source of the problem. This evaluation indicated several related breakers were either tripped or in the wrong position. The final test attempted proved much more serious with a complete failure of a utility breaker which exhibited visual damage and a smoke odor.

Being commissioned prior to start of site acceptance testing Encore Series data was reviewed for forensic evidence of this failure. The monitoring system design was such that critical locations important to this test were instrumented providing extremely valuable data which resulted in the quick diagnosis of this problem. Each generator bus (Generator 1, Generator 2) and utility feed (Utility 1, Utility 2) was monitored and waveshapes recorded at locations Generator 1 and Utility 2 at the time of the last test that resulted in the breaker failure.

A close inspection of the current waveforms recorded at both Generator 1 (3000A bus) and Utility 2 (4000A bus) locations provided a key indicator of the source of the problem. Current measurements at each location were many times higher than the rated bus capacity. In fact, current waveshapes on all phases were clipped indicating a saturation of current transformers (CT’s) as a result of currents well in excess of their specifications. 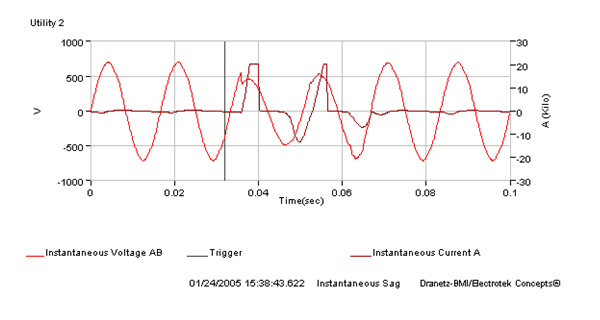 The data above quickly led the team to closely review the sequence of events leading up to, and resulting from the failure at these locations. As suspected, Generator 1 and Utility 2 buses were connected together as shown in the diagram below at the time of failure. Being out of phase the resultant current draw on the system caused the related breakers to trip and ultimately led to the failure of the Generator 1 breaker. Further investigation indicated a sequencing problem in the programmable logic controller (PLC) allowing the Generator 1 and Utility 2 breakers to be closed at the same time. A programming error in the PLC was determined to be the ultimate source of the problem. The programming error was corrected, the failed breaker repaired and the tests were then successfully performed.

“Encore Series paid for itself today” commented the facility manager. Having a power quality monitoring system oversee site commissioning helped this facility very quickly resolve a critical path failure with minimal impact on the overall schedule. In this case, the payback for the system was less than 1 month!