Light Flicker in an Office Complex

The second floor of an end unit of an office-condo complex in the Washington DC area. The office space consisted of a reception and meeting area, two private offices, a kitchen area and a bathroom. The entire area was powered from a single three-phase 208/120V wye feed from a transformer bank located right below and outside the office.

A light flicker problem had been noticeable for a number of years. It was most visible in the bathroom and outside hallway. The source of the flicker was undetermined, though it was suspected to be the HVAC units on the roof, as there was an audible sound in the bathroom that accompanied the flicker.

The voltage and current of both phases were monitored at the breaker panel (which happened to be in the bathroom). The top two lines in Figure 1 are the line-to-neutral voltages of two of the three phases in the 208/120 wye circuit. The lower two lines are the current, with the one at 26 Amps corresponding to the 124 Vrms nominal voltage (referred henceforth as the Blue Phase). The voltage of the Blue phase varied between 118.3 and 126.3Vrms, while the current varied 23.4-26.8 Arms. The other phase shown (Black Phase), varied from 115.3V-123.3Vrms while the current varied 17.2-19.4 Arms. Figures 2 and 3 below show the waveforms of voltage and current for the two phases. The voltage fluctuation is visible. 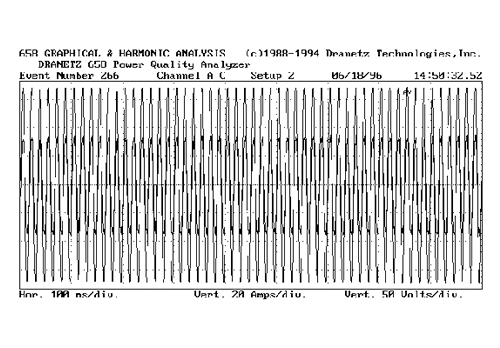 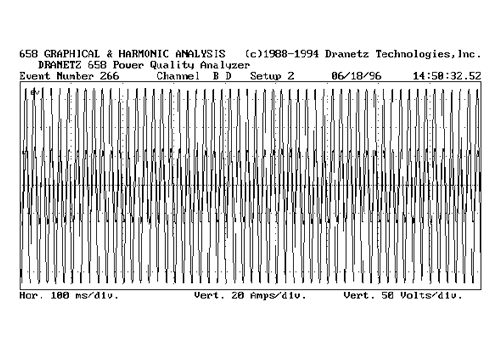 Voltage fluctuation is usually the cause of light flicker. The human eye is most sensitive around 8.8 Hz, where less than a 0.5% variation in the RMS value will be noticeable by most people. This is especially true with incandascent lights, which were found in the bathroom and hallway.

This could also be deduced by looking at the time plots and seeing that the current was changing very little during the voltage fluctuation. For a load side problem, the current usually changes significantly to produce the voltage variation. The change noticed in the current is nearly proportional to the change in voltage, which one would expect in a linear system. The voltage variation was so large that it was noticeable in the audible sound produced by the bathroom fan, which was mistaken as being the HVAC system.

Since the source of the problem was determined to be before the electric meter, the utility company was contacted to determine the source in their system