The Father of Power Quality

In 1948 Mr. Dranetz joined Gulton Industries Inc., a young entrepreneurial New Jersey company which had started to develop and manufacture products based on the newly discovered piezoelectric effect in ferroelectric polycrystalline barium titanate ceramics. Dranetz’ first job as a research engineer was to evaluate these new ceramics for potential use in future sonar transducers many of which Gulton later supplied to the Navy and its prime 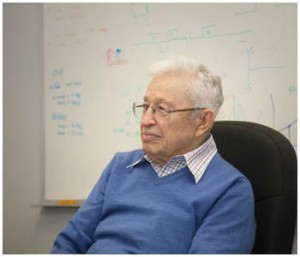 contractors. With growing applications of these ceramics he personally designed the first barium titanate accelerometer and later designed and received patents for other piezoelectric transducers for measurement of shock and vibration, force and blast, and for ultrasonic microphones for TV remote control. As Gulton and its product lines grew, Dranetz was promoted to Chief Engineer of the Instrument Division, then to Director of Engineering of all the Gulton’s New Jersey activities, ultimately heading a staff of approximately 250 engineers and technicians. In 1958 he was appointed Vice-President of Gulton and General Manager of the Instrument Division, assuming the responsibility for development, manufacturing, test and sales for this Division.

In 1962 Mr. Dranetz left Gulton to start Dranetz Technologies, Inc. for which he served as President and Chairman of the Board throughout his tenure there. During the incubation period, in addition to being the principal designer of the Company’s first product, he became an independent transducer design consultant for several other organizations and also began to serve as a regular reviewer of transducer patents for the Journal of the Acoustic Society of America. The first Company product was a Complex Plane Impedance/Admittance Locus Plotter for analyzing sonar transducers while frequency scanning through their mechanical and acoustical resonances. After the prototype’s completion, Mr. Dranetz stopped his direct design activities and immediately began to market the product. In addition to his functions as President, Dranetz divided all of the Company’s operational functions with his partner with Mr. Dranetz assuming direct responsibility for all marketing, sales, and new product development. His partner assumed direct responsibility for manufacturing, purchasing and facilities. This arrangement, allowed Mr. Dranetz to keep very close to new product developments, remained substantially unchanged until he retired.

The first sonar testing product was followed by other sonar test systems and precision phase angle meters as well as relay testing instruments for electric utility companies. In the early 1970’s, Mr. Dranetz initiated and closely supervised a feasibility study in 1974 that led to the Company’s Model 606 Power Line Disturbance Analyzer, a portable powerline monitoring instrument for a real time alphanumeric printout of the description of each voltage and current aberration which could have upset a computer. This analyzer, one of the very early non-computer/calculator devices to utilize a microprocessor, used three new technologies- the Intel 2N4040 4 bit microprocessor with an external memory of 2000 bytes, a miniature switching type power supply, and a small 2 1/4″ thermal alphanumeric printer. This product was followed by a number of other new microprocessor based products, resulting in a rapid expansion in firmware and software development activities. Mr. Dranetz also encouraged and supported the development of technical courses and handbooks on power line quality and electrical energy usage management to support its customers.

Under Dranetz’ leadership the Company received a number of awards and recognition’s. For its excellent growth in exporting, the company was awarded the “E Award” in 1978 by the U.S. Department of Commerce; and the “E-STAR award” in 1984. For several years Forbes Magazine listed the Company in its “Up and Comers” sections, and INC Magazine for several years included Dranetz in its lists of fastest growing small companies. In 1986 the Company was written up in the book “The 101 Best-Performing Companies in America” (by R. N. Paul & J. W. Taylor). In 1998 the company, which had been publicly traded since 1969, was purchased by Hawker Siddeley, a large British company. Before retiring, Mr. Dranetz remained with the Company for an additional year during which time he received the PCIM/PV award for “Pioneering in the Analysis of Electrical Disturbances”. Mr. Dranetz has authored numerous articles, was a contributor in the Shock and Vibration Handbook (by Crede & Harris), and has been awarded a number of patents on transducers. He has served on several ASA standards committees and has been a patent reviewer for the Journal of the Acoustical Society of America. He has been a member of the N.J. District Export Council of the U.S. Department of Commerce, encouraging and teaching other companies to export, and was a director of the Central Jersey Chamber of Commerce. He is currently a member of the Board of Overseers at Tufts University’s College of Engineering. Dranetz is also a member of Tau Beta Pi, a member of the American Institute of Electrical Engineers, a Fellow of the Acoustical Society of America, a Fellow of the American Society for the Advancement of Science and a member of the New Jersey Society of Professional Engineers.